The National University of «Ostroh Academy» received an official letter from the administration of Guinness World Records confirming the nomination «The Longest Reading Marathon».

It should be recalled that from February, 27 students and teachers continuously were reading poems of Taras Shevchenko. This unique event was dedicated to the 200th anniversary of the birthday of Great Kobzar and to memory of victims of confrontations in Ukraine. So for 456 hours recorded on watches about three thousand participants reread «Kobzar» 45 times, and those were 11 250 poems. Also at the request of the Guinness Book of Records in the hall where the action took place the whole days and nights online video broadcast was conducted on the official site of Ostroh Academy and photographers also did photos. Live broadcast of the reading marathon of Taras Shevchenkos writings suffered 18 hacker attacks. 228 witnesses watched the course of action and 114 stewards coordinated action. During the marathon participants drank 1,200 liters of coffee and tea and 1,000 liters of water.

After the action everything was documented, and those were photos, video on hard disks and 15 kilograms of printed text in Ukrainian and English. Verification of documents by the administration of the Guinness took about three months. Incidentally, taking into account current situation in Ukraine, hard drives were tested even by the British secret services. However, despite everything, Ostroh Academy managed to become the first higher educational establishment of Ukraine that got into the Guinness Book of Records

We said,«We can do it!» and we did it! This is our common achievement which once again proved that we can be proud of our creative, united and friendly students. For the first time our poet was honored worldwide. In the context of today’s events his writings are particularly relevant, because the vision and prophetic words of Taras Shevchenko just impress 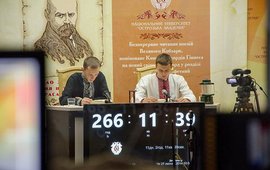 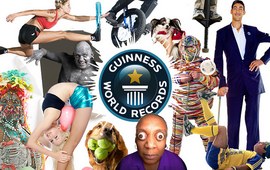